I AM NOT ASHAMED OF THE GOSPEL

EPISTLE TO THE ROMANS

On God’s intervention into the plans of His servants, John Calvin has this to say: “We, therefore, learn that the Lord frequently upsets the purposes of His saints, in order to humble them, and by such humiliation to teach them to regard his Providence, that they may rely on it; though the saints, who design nothing without the Lord’s will, cannot be said, strictly speaking, to be driven away from their purposes. It is indeed the presumption of impiety to pass by God, and without Him to determine on things to come, as though they were in our own power; and this is what James sharply reprehends.1 But he says that he was hindered: you must take this in no other sense, but that the Lord employed him in more urgent concerns, which he could not have neglected without loss to the Church. Thus, the hindrances of the godly and of the unbelieving differ: the latter perceive only that they are hindered, when they are restrained by the strong hand of the Lord, so as not to be able to move; but the former are satisfied with any hindrance that arises from some approved reason; nor do they allow themselves to attempt anything beyond their duty, or contrary to edification.”2

Charles Spurgeon sees Paul’s desire to visit Rome this way: “Rome was a sink of iniquity; it was the den of the lions, where Nero was, who would speedily devour, like a lion, the minister of Christ. Paul wanted somehow to get into that old city on the seven hills and to pluck some fruit for God even from the vine that was planted there, but he was hindered.”3 Spurgeon raises an issue as to why we as believers should not be afraid to go into situations that may be unfriendly to the Gospel in order to rescue those who cannot escape on their own. But the real point is how do some believer’s react when they see such an opportunity? For instance, what would you think while observing two separate firefighting crews called to the same scene if one crew stands outside calling for the residents to run out so they could save them, while the other crew rushes inside the burning building and carries out as many as possible before the building collapses? It is the same with many churches today. Some build a beautiful edifice and put up a sign to welcome to all who want to attend, while others go out into the neighborhood, knocking on doors, knowing they may not get a friendly reaction, to give a personal invitation to attend.

I was once assigned for a short time to pastor a church that had been built at its location many years earlier when the neighborhood consisted of middle-class, Caucasian, blue-collar workers. By the time I arrived, the neighborhood now consisted of Haitian immigrants, African-Americans, and a large gay community. All of the white church members had moved out into surrounding suburbs, and drove into this neighborhood on Sundays and Wednesdays for their services. When I asked if they had carried out any evangelism effort in the neighborhood, they looked at me as if I didn’t understand that the people who lived nearby were not who they wanted in their pews. I organized an outreach program anyhow. We went from door to door in a sixteen block area. I was not surprised when many I talked to, told me they had come once to that church but didn’t feel welcomed.

Verses 14-15: I am indebted to both civilized Greeks and Barbarians, to both educated and the uneducated; therefore I am eager to proclaim the Good News also to you who live in Rome.

Although Paul was born a Jew and raised in Jewish traditions, he feels a strong affinity with other cultures as well. After all, he was born outside of Israel in the Greek-dominated territory of Cilicia, which lies in SE Turkey today, in the city of Tarsus.1 That’s where he learned Greek, along with Hebrew in the synagogue. 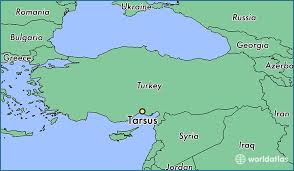 Charles Spurgeon makes this point: “Paul felt a debt to everybody. The God who saved him that he might preach the gospel in every place he could reach. Brethren, if you have received much from God, you are so much the debtor to men; and you are debtors not only to the respectable, but to the disreputable, debtors not only to those who come to a place of worship, but to the dwellers in the slums, “to the Greeks, and to the barbarians; to the wise and to the unwise.”5

The influence of the Greek culture also taught him that outside the Hellenistic realm, all other ethnicities were thought of as uncivilized and called “barbarians.” In fact, in one document written by a Greek biographer, we find this sentence: “I come now to the man who was the bravest and the greatest at strategy among of all the barbarians with the exception of the two Carthaginians Hamilcar and Hannibal.”6

Early church scholar Ambrosiaster gives his commentary on Paul’s commitment: “Paul says that he is under obligation to those whom he names because he was sent for the purpose of preaching to everyone. For this reason, he states that they are all under obligation to believe in God the Creator, from whom and through whom are all things, for obligation and honor form part of the salvation of the believer. He wrote Greeks instead of Gentiles, but this includes those who are called Romans, whether by birth or by adoption, and barbarians, who are those who are not Romans, whose race is inimical, and who are not Gentiles. He speaks of those who are wise because they are learned in worldly sciences and are called wise in the world whether they are stargazers, geometers, mathematicians, grammarians, orators or musicians. Paul shows that none of these things is of any advantage, nor are these people truly wise unless they believe in Christ. He calls them fools because in their simplicity they lack knowledge of spiritual things. He testifies that he has been sent to preach to them all. But he says nothing about the Jews because he is the teacher of the Gentiles.7 And this is why he says that he is under obligation because he has accepted this teaching in order to pass it on, and in passing it on, to acquire it himself.”8

So in sharing his burden, Paul uses a repetitive phrase to describe those groups for whom he feels a burden. First, he calls them civilized and uncivilized, then repeats the same phrase with synonyms, educated and uneducated. He did not do this to isolate them, but to draw a circle big enough to include everyone, even the Romans. After all, he told the Thessalonians: “I am free. I belong to no other person, but I make myself a slave to everyone. I do this to help save as many people as I can.”9 Paul meant that when he was invited into a Jewish home he complied with the traditions, such as taking off his shoes, having his feet washed. And when he entered the home of a Greek, he ate what was set before him, he did not quibble over whether or not it was kosher.

Bible scholar Charles Hodge offers this comment: “His commission was a general one, confined to no one nation, and to no particular class. Greeks and barbarians, mean all nations; wise and unwise, mean all classes. Barbarian means properly a foreigner, one of another language.10 Greeks and barbarians, therefore, is equivalent to Greeks and not Greeks, all nations. As the Greeks, however, excelled other nations in civilization, the word came to signify rude, uncultivated; though even by later writers it is often used in its original sense, and not as a term of reproach. The apostle distinguishes men first as nations, Greeks and not Greeks, and secondly as to culture, wise and unwise. The Romans, whose city was called ‘an epitome of the world,’ belonged exclusively neither to the one class nor to the other. Some were wise and some unwise, some Greeks and some barbarians.”11

Paul explained it to the Thessalonians this way: “The new-self allows no room for discriminating between Gentile and Jew, circumcised and uncircumcised, foreigner, savage, slave, free man; on the contrary, having the Messiah in you is everything .”12 Paul was on good ground for making this claim. It was the Messiah Himself who said this: “I praise you, Father, Lord of the universe. I am thankful that you have hidden these things from those who are so wise and so smart. But you have shown them to people who are like little children.”13 Paul made this same point when writing to the Corinthians about why some of the so-called religious experts considered the preaching of the cross as foolishness. He tells them: “As the Scriptures say, ‘I will destroy the wisdom of the wise. I will confuse the understanding of the intelligent.’14”15

Paul pointed out to the Corinthians a factor this still confuses some people today who say they can’t understand our explanation of faith in God and in the Bible. He wrote: “We don’t use words taught to us by human wisdom. We use words taught to us by the Spirit. We use the Spirit’s words to explain spiritual truths. People who do not have God’s Spirit do not accept the things that come from his Spirit. They think these things are foolish. They cannot understand them because they can only be understood with the Spirit’s help.”16 In other words, the only way a sinner can understand the Bible or a sermon from God’s word is if the Spirit opens their mind to comprehend it. So Paul goes on to explain: “Let no one fool himself. If someone among you thinks he is wise (by this world’s standards), let him realize his foolishness so that he may become really wise. For the wisdom of this world is nonsense, as far as God is concerned.”17 The Greek word used here for “foolish” actually means: “To act like a person with no learning.” In other words, a person whose mind is already made-up, and they have no interest in learning anything new.

Paul would touch on this subject again and tell the Corinthians: “We don’t dare put ourselves in the same class with those who think they are so important. We don’t compare ourselves to them. They use themselves to measure themselves, and they judge themselves by what they themselves are. This shows that they know nothing.”18 This was not new, Solomon had problems like this in his day: “Fools, how long will you love being ignorant? How long will you make fun of wisdom? How long will you hate knowledge? I wanted to tell you everything I knew and give you all my knowledge, but you didn’t listen to my advice and teaching.”19 But Paul will not let anything like that slow him down.

4 Tarsus during the time of Paul has been excavated very little due to the location of the modern Turkish city of Cumhuriyet Alani atop the ruins. Excavations have turned up a paved city street of Tarsus along with a colonnaded podium, which may date to the 2nd century BC.