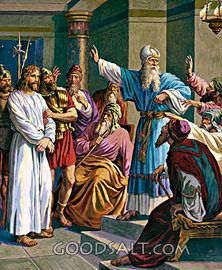 One highly regarded Jewish scholar, Moses Maimonides, gives the following clarification on such individuals. “The laws which pertain to a “mesit”, a person who entices others to serve false gods, differ from those pertaining to others liable for capital punishment. We hide witnesses to observe his act. He does not need a warning as must be given to others who are executed. If he departed from the court after being acquitted, and someone said: ‘I know a rationale that will lead to his conviction,’ he is returned and retried. If he was sentenced to death and someone said: ‘I know a rationale that will lead to his release,’ he is not retried. The court does not advance arguments in defense of a mesit. An elderly person, a eunuch, and a person who does not have sons will not be placed on the court which judges him so that they will not have mercy on him. For cruelty to those who sway the people after empty promises brings mercy to the world, ‘so that God will turn away from His fierce anger and grant you mercy.’1 A “mesit” is a Jew who seduces an individual to idolatry, while a “maddiah” is someone who publicly entices many into idolatry.”2

The Hebrew word for Messiah is “Mashiah.” Could this have been a case of sinister satire? In the Talmud, we find an interesting teaching on the trial of such mesits and maddiahs. The main commentary (Gemara) points this out: “A light is lit in an inner chamber, the witnesses are hidden in an outer one [which is in darkness] so that they can see and hear him, but he cannot see them. Then the person he wished to persuade says to him, ‘Tell me confidentially your proposition to me’; and he does so. But the person objects; ‘How can we forsake our God in Heaven, and serve idols’? If he retracts, it is well. But if he replies: ‘It is our duty and proper for us’, the witnesses who were listening outside bring him before the Beit Din,3 and have him stoned.”4

In this same folio we find an interesting anecdote:

“In the uncensored editions of the Talmud there follows this important passage: ‘And this they did to Ben Stada in Lydda, and they hung him on the eve of Passover. Ben Stada was Ben Padira. Rabbi Hisda said: ‘The husband was Stada, the paramour Pandira. But was not the husband Pappos ben Judah? — His mother’s name was Stada. But his mother was Miriam, a dresser of woman’s hair? This woman has turned away from her husband, (i.e., committed adultery). R. Travers Herford, identifies this Ben Stada as Jesus of Nazareth.5 As to the meaning of the name, he connects it with ‘seditious’, and suggests6 that it originally denoted ‘that Egyptian’,7 who claimed to be a prophet and led his followers to the Mount of Olives, where he was routed by the Procurator Felix,8 and that in later times he might have been confused with Yeshua ha-Nōtzri (Jesus of Nazareth). This hypothesis, however, involves the disregard of the Talmudic data, for Pappos ben Judah lived a century after Jesus.9 Although the mother’s name, Miriam (Mary), would raise no difficulty, yet the Hebrew “megaddela neshayia” [hair dresser] may be the result of a confusion with Mary Magdalene.10 Also, Joseph Derenburg, a Franco-German orientalist, denies the identity of Ben Stada with Jesus, and regards him simply as a false prophet executed during the second century at Lydda.”11

Verse 63a: But Jesus said nothing.

Some have compared our Lord’s silence before the court with Apollonius (15-100 AD), a Greek philosopher from the town of Tyana in the Roman province of Cappadocia in Asia Minor, who some have identified as the Apollos who became a friend of the apostle Paul. Little is known about him with certainty. Being a 1st-century orator and philosopher around the time of Christ, he was compared to Jesus of Nazareth by Christians in the 4th century. On one occasion, Apollonius was threatened with being tried before emperor Domitian, and later gives a summary of his defense:

“If,” said Apollonius, “I am allowed to plead as long as the necessities of the suit require me to, the whole of the Tiber river might run through the meter before I could have finished; but if I am only to answer the questions put to me, then it depends on the cross-examiner how long I shall take to give my answers.” “You have refined,” remarked the other, “conflicting talents when you thus engage in talking about one and the same matter both with brevity and with verbosity.” “They are not conflicting talents,” said Apollonius, “but resemble each other. And moreover, there is a balance between the two…and for my own part I am sure that silence constitutes an excellence much required in a law-court.”13

So even among the Greeks, remaining silent was considered a virtue that works to the good of the defendant in court. The apostle James may have been aware of this concept, because he also promoted a basic premise for all believers to follow in such circumstances: “My dear brothers and sisters, always be more willing to listen than to speak.”14

Verse 63b: Again the high priest said to Jesus, “You are now under oath. I command you by the power of the living God to tell us the truth. Tell us, are you the Messiah, the Son of God?”

The high priest’s insistence that Jesus swear by the living God that He was, in fact, the Messiah, the Son of God, was not to get the truth out in the open for all to hear and believe but to accuse Him of lying under oath. This is one of the rare places where we find “Messiah, Son of God,” spoken of in the same sentence by a Jewish opponent of our Lord. It appears that the high priest accepted what the Psalmist said about the Anointed One.15 But this was not all that out of line.

The great Jewish commentator Rabbi Rashi made this observation on what the Psalmist said: “Our Sages expounded the passage as referring to the King Messiah.16”17 So the question about being the Messiah was bait. He wanted an admission in order to accuse Jesus of blasphemy, a sin worthy of death. The truth was revealed but the mind-searing rage of hate hid this reality from their eyes. How often are sinners confronted with the truth but yet fail to see it because they are blinded by doubt and fear?

How ironic those false witnesses could not convict Jesus, but the truth found Him guilty of being honest. What a wonderful dilemma! If anyone accuses you of being a Christian, or a Bible Believer; or a Jesus Fanatic, let the truth convict you. Before, when Jesus was asked if He had anything to say in His defense against the witnesses that were brought against Him, He remained silent. But now He is asked a question under oath. If He remained silent, then it would be interpreted by the interrogator as sufficient to prove his point that Jesus was making such a blasphemous claim.

3 Beit Din is literally translated as “house of judgment.” It is the Hebrew term applied to a Jewish religious or civil court of law. The Beit Din originated during the period of the Second Temple and was then known as the Sanhedrin.