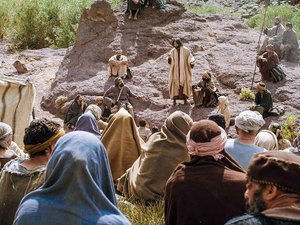 Verse 31: Then Jesus told the people another story: “God’s kingdom is like a mustard seed that a man plants in his field.”

Now our Master continues with the story of the seed. This time He points out that even if the seed that falls on good ground and grows among rocks, and weeds, and scavenging birds, may be the smallest of all, its potential will be much larger and more usable than many of those worthless plants around them. A lot has been said about the mustard seed because of its tiny size, but there are also other beneficial elements in this tiny seed. Those familiar with agriculture tell us that mustard seeds can be traced to different areas of Europe and Asia with the white variety originating in the eastern Mediterranean regions, the brown from the foothills of the Himalayan Mountains, and the black from the Middle East.

Mustard seeds are mentioned in ancient Sanskrit writings dating back about 5,000 years ago.1 While mustard seeds were used for their culinary properties in ancient Greece, it seems that it was the ancient Romans who invented a paste from the ground seeds which was probably the ancestor of our modern day mustard condiment. The physicians of both civilizations, including the father of medicine, Hippocrates, used mustard seed medicinally.

Verse 32: It is the smallest of all seeds. But when it grows, it is the largest of all garden plants. It becomes a tree big enough for the birds to come and make nests in its branches.

Mustard seed is one of the most popular spices traded in the world today. As it grows well in temperate climates, the areas that produce the greatest amount of mustard seeds currently include Hungary, Great Britain, India, Canada and the United States. Mustard seeds emerged from our food ranking system as an excellent source of selenium, a nutrient that has been shown to help reduce the severity of asthma, decrease some of the symptoms of rheumatoid arthritis, and help prevent cancer. They also qualify as a good source of magnesium. Like selenium, magnesium has been shown to help lower high blood pressure, to restore normal sleep patterns in women having difficulty with the symptoms of menopause, to reduce the frequency of migraine attacks, and to prevent heart attack in patients suffering from atherosclerosis or diabetic heart disease.

Mustard seeds also qualified as a very good source of omega-3 fatty acids and manganese as well as a good source of phosphorus, copper, and vitamin B1. So Jesus did not pick just any old seed, but one that He knew was exception in it use and value. But it was the size of the seed that got most of the attention which lent itself to being used to describe something tiny. For instance, one Rabbi said: “The daughters of Israel have undertaken to be so strict with themselves that if they see a drop of blood no bigger than a mustard seed they wait another seven days to be declared pure.”2 This had to do with purification after their menstruation period ends.

In another place they amplify what this Rabbi said: “The daughters of Israel imposed spontaneously upon themselves the restriction that if they saw on their garments a spot of blood no bigger than a mustard seed, they waited for seven days without seeing any further spots before taking a ritual bath.”3 The Rabbis were intent on covering every situation possible, like the one we find concerning the priest performing his duties: “If a man was eating a Heave-offering and he felt the need to urinate, he must cross his legs swallow the Heave-offering. However, if there be any discharge that makes a spot no larger than a mustard seed or less, it renders him unclean.”4

And on another page they emphasize that even if some small part of a lump of dough, even as small as a mustard seed, is contaminated, then the whole lump is unclean.5 In other words, they considered even the smallest spot to be enough to make them totally unclean. So by Jesus using the mustard seed in His illustration, His audience well understood the impact of what He was saying. Our Lord turns this around to show how something very big can come out of something so small.

The Jews also spoke in these terms. They tell us: “There was a case in the town of Shikhin6 of a single stalk of mustard that had three branches. One of the branches was stripped off and served on its own to cover the potter’s booth as a roof.”7 This story must have gotten around, because in another place they retell it this way: “It once happened to a man at Shikhin also known as Sepphoris in Galilee to whom his father left three twigs of mustard that one of these split and was found to contain 2.5 gallons of mustard, and its timber sufficed to cover a potter’s hut.”8

Earlier, Jesus had spoken about the farmer sowing grain, and now He is talking about a mustard seed tree. This certainly registered in His Jewish listener’s minds since these were familiar topics. So not only did our Lord chose a seed for its size to make a point but no doubt He knowingly picked one with great potential for contributing to good health and serves a vital role as part of preventive medicines. This parable also echoes the same message we find Ezekiel:

“This is what the Lord God says:

‘I will take a branch from a tall cedar tree.
I will take a small branch from the top of the tree,
and I myself will plant it on a very high mountain.
I myself will plant it on a high mountain in Israel.
That branch will grow into a tree.
It will grow branches and make fruit
and become a beautiful cedar tree.
Many birds will sit on its branches
and live in the shadows under its branches.

Then the other trees will know that
I, theLord, make tall trees fall to the ground,
and I make small trees grow tall.
I make green trees become dry,
and I make dry trees become green.
I am theLord.
If I say that I will do something, then I will do it!’”9

Could this be the same tree that Nebuchadnezzar saw and told Daniel about?10 But another prohibition may have also entered their minds. The Rabbis taught: “It is forbidden to sow mustard or saffron close to a wheat field even for experimentation purposes, because a stranger will assume that, since mustard or saffron are harmful as a neighbor to wheat, a person would not have planted, nor allow another to plant it, unless he needed its actual yield and that therefore, he is practicing crossbreeding, but it is permitted to sow mustard or saffron close to a vegetable field which is not harmed by the proximity of these two plants, and so a stranger would assume that these two belong to different people.”11

Jerome has this to say on how he understands what our Lord is teaching in this parable: “I believe that the branches of the gospel tree that grew from the grain of mustard seed signify the different teachings whereon each one of the birds mentioned perches. Let us also take on the feathers of a dove so that, flying to the higher parts, we may dwell on the branches of this tree and make nests for ourselves from the different doctrines and, fleeing from earthly things, hasten to heavenly things. Many people read that the grain of mustard seed is the smallest of all seeds. They read what the disciples say in the Gospel: ‘Lord, increase our faith,’12 and the answer given to them by the Savior: ‘Truly, I say to you, if you have faith even like a mustard seed, you will say to this mountain, ‘Move from here to there,’ and it will move.’13 They wonder whether an apostle would ask for a small faith or they doubt the Lord concerning what he has to say about small faith. Yet Paul the apostle makes an even greater comparison than faith to a grain of mustard. In fact, what does he say? “If I have all faith so as to move mountains, yet do not have love, I am nothing.14”15

Our effort to understand this should be looked at as part of a larger context established in this teaching of Jesus, and that is how good seed and bad seed sown in the same field react to one another, especially in their search for nutrients in the soil and jostling for position. Jesus just used a parable in which a call went out to remove the weeds from among the wheat before harvest time, perhaps due to the fact that weeds often grow faster and larger than wheat. Now through this parable of the mustard seed, Jesus gives believers encouragement that even though they may be in the minority, to stay on a steady course because in the end they will prevail. He carries this same principle over into this parable of the mustard seed.

Here we have a great example for us in not only having the seed of God’s Word sown in our hearts but also when we have the opportunity of sowing it in the hearts of others. First, it must be the genuine seed, not some artificial imitation. Second, the condition of the soil will help us understand the growth of the seed into a producing plant. But in order to have the faith and confidence in sowing that seed, we need faith only the size of a mustard seed to believe that what starts out small may still end up being great.

But let’s make sure that we don’t mix up our Lord’s use of the size of the mustard seed in comparison to how faith of a similar size can even move mountains. Here He is talking about something that has a small, humble beginning with the potential of growing bigger and bigger in comparison to its size when planted. In this case He is talking about the Kingdom of Heaven, how it will have a tiny beginning but grow into a huge entity. With the seed, He was talking about the Word of God being sown and some of it falling on different types of soil and producing or not producing any yield. So how could we reconcile the Jewish teaching of keeping the mustard plants and the wheat plants apart so as not to infect one with the other. The Lord’s next parable tells us where He is taking this conversation, so that will help our understanding.

1 Damar Tantra: The Water of Auspiciousness, The Shivambu Kalpa, v. 34

6 Shikhin is a village about 5 miles NW of Nazareth. It was abandoned in the 4th century AD, but as late as May 2012 excavations have been initiated that have so far uncovered potter and a synagogue.