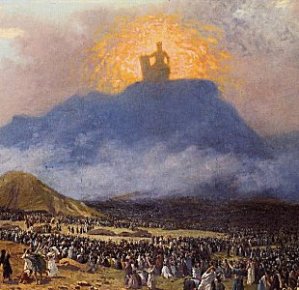 This Psalm is a repeat of Psalm 40:13-17. But the compilers of the Psalter felt it necessary to include it again at this point because it follows the theme of this section. In this location, it emphasizes David’s desire to be reconciled with God after his sinful act of adultery with Bathsheba. Although devastated by his fall and buried beneath a mountain of guilt, David knew his only way back was through the grace and mercy of God. He decided that no matter what was taken away from him because of disobedience, he would rather die than lose his faith in a gracious and forgiving God. For David, living without God in his life was unthinkable, so he humbled himself and poured out his heart on the mercy seat of his Heavenly Father.

“O LORD Eternal, I need Your grace now more than ever; please, O LORD Eternal, act quickly before it’s too late. And do something about those whose intent is to ruin my life; let them know what it feels like to be humiliated and disgraced; yes, let those who seek to make my life miserable be ashamed of themselves. And let those who come around taunting me saying, “Aha! Aha!” experience what it means to be dejected, especially when they don’t succeed in making me give up. On the other hand, let everyone who seeks You be given a reason to rejoice because they know You; yes, may all those who eagerly turn to You for deliverance by able to say, ‘Magnify the LORD Eternal with me!’ Even though I feel worthless and see no reason to go on, I know my Divine Master wants me to keep going. That’s why I look to You as my Savior and believe You came to save me. O One True God, please do something soon.” Psalm 70:1-5

Reflection: After praise and worship the pastor introduced a visiting minister. He told the congregation this was one of his dearest friends since childhood. The elderly gentleman he introduced walked to the pulpit began to tell this story: “A father, his son, and his son’s friend were sailing off the Pacific Coast, when a fast approaching storm prevented any attempt of their getting back to shore. The waves were so high, that even though the father was an experienced sailor he could not keep the boat upright, and the three were thrown into the ocean as the boat capsized. Grabbing the only rescue line the father had, he was forced to make an excruciating decision: to which boy he would throw the lifeline. He had only seconds to make up his mind. This father’s son was already a believer, but his son’s friend was not. With great agony the father yelled, ‘I love you, son!’, as he threw the lifeline to his son’s friend. By the time he pulled the friend back to the capsized boat, his son disappeared beneath the raging swells into the black of night. His body was never recovered.” As the old gentleman was speaking, he spotted two teenagers sitting up straight in their pew anxiously waiting for what happened next. The visiting minister continued: “The father knew his son would go into eternity with Jesus, but he could not bear letting his son’s friend step into an eternity without a Savior. Therefore, he sacrificed his son to save the son’s friend.” The guest minister then asked, “How great is the love of God that He would do the same for us.” After the service the two teenagers shook hands with the visiting speaker. “That was a nice story,” said one of the boys, “but isn’t it unrealistic to think that a father would give up his only son’s life in hopes that the other boy would become a Christian?” “Well, you’ve got a point there,” the elderly minister replied. “But let me tell you, I understand more than most people the pain God must have felt when He gave up His only Son for lost sinners. For you see, I’m the man who lost his son to the ocean that day, and my son’s friend is now your pastor.” If God will love us that much while we were yet sinners, don’t you think He will still love us even if we go astray. So don’t let your doubt be a substitute for God’s faithfulness. Hold on to your faith in Him, even if you have little faith in yourself. He did not give up His only begotten Son just to save others, He loved you too and wants you to always be His child.